As developers find new ways of increasing the speed and traffic congestion of blockchain networks, scaling has become a top priority. This is because they are constantly looking for new ways to scale, increase transaction processing speeds, and reduce traffic congestion. Major networks such as Bitcoin and Ethereum have a lot of scaling problems.

Elrond harnesses the potential of successful scaling blockchain environments to allow the development of decentralized apps for different use cases and to create an internet economy with new digital resources. Elrond uses smart contracts to facilitate fast transactions on the ledger and support the issuance digital assets.

Are you interested in Elrond (EGLD), but not sure where to begin or what it entails? No worries. This guide will tell you all you need to know about the project, and help you get started on the most enjoyable trading experience possible.

What is Elrond (EGLD), you ask?

Elrond, a blockchain-based platform, allows users to develop and decentralize applications and cryptocurrencies in order to build a new Internet economy. This project is designed to address the problem of congestion in traffic on blockchain networks and provide solutions for scaling. Elrond provides fast transactions, scalable environments for developers, enterprises, and users, as well as a user-friendly experience and low transaction fees.

According to reports, the network can process up to 15,000 transactions per minute. This makes it one of the fastest and most efficient blockchain networks. The native token, eGold, is known by the ticker EGLD. It is a multi-functional cryptocurrency. EGLD can be used to vote, stake and trade on the network. It is the main asset of the incentive system that rewards participants in the network. Elrond has a latency time of six seconds and can scale through sharding. It also offers attractive transaction fees at $0.001

Elrond, a blockchain-based software, rewards network participants whose computing powers support the smart contract system developers can use for decentralized apps and assets.

How does Elrond work?

Elrond software is designed to create dApps and develop digital assets that are supported by smart contracts. Elrond employs Adaptive State Sharding to scale the environment for users and developers. This feature divides the network infrastructure in order to support growing numbers of transactions and applications.

Secure Proof of Stake is Elrond’s consensus mechanism. This is an extension of the PoS protocol and ensures that all partitions of the network are connected to a functional ledger platform. The Elrond Integrated Development Environment can be used by developers to create applications that replicate products and services.
Smart contracts can be run with a variety of programming languages including C++, C++ and Rust. Users can also create decentralized applications using the same set languages. The network is supported by nodes that run on it to secure transactions. The network is divided into smaller segments to allow nodes to resolve transactions individually. This prevents congestion and allows for scaling.

Secure Proof of Stake is a consensus mechanism that synchronizes nodes on the network to connect all shards which are separated by sharding. Elrond is capable of processing a minimum 12,500 transactions per second thanks to sharding.

Who are the founders of Elrond’s? (History of Elrond).

Elrond hosted an ICO event in July 2019 that raised more than $3.2 million. 25% of the total fund was sold. Elrond was originally listed under the ticker “EDD”, but this changed to EFGD after the mainnet launch.

What makes Elrond so special?

Elrond’s use of sharding is unique. It uses Adaptive State Sharding to split the network into smaller parts so that nodes can validate transactions. This allows the network to process thousands of transactions per second and requires low fees.

The Elrond project seeks to create a digital economy in which decentralization, scalability and other features are part of the blockchain infrastructure. Elrond allows users create assets and decentralized apps, as well as perform low-cost transactions. This project is unique because it allows for enterprise-grade dApps and scales with three programming languages.

What value does Elrond provide?

Elrond’s value comes from its technical capabilities, the technology behind it, its ability to scale and its provision of enterprise-grade solutions dApps/digital assets and its use cases. These elements are what determine Elrond’s intrinsic value as a project. EGLD’s intrinsic value is often not equal to its market value. Therefore, EGLD can be either overbought/underbought.

Elrond’s market price is what defines its market value. It is subject to changes and trends reversals, so it is highly susceptible to market fluctuations. Volatility is a factor that affects Elrond’s market value. There are many factors that can cause the price to rise or fall. Elrond’s value is determined by its usage. The number of active users can be used to determine how valuable Elrond as a utility blockchain project.

There are currently 22,958,470 EGLD. Elrond was initially launched with a cap of 31,415,926 tokens. The circulating fund tends to a slowly decreasing inflation rate, which provides staking incentives for the first ten year. Fees can also be used to reward stake holders. As the sum of fees increases, inflation decreases, and inflation reaches zero if more fees are generated than the minimum guaranteed rewards. This is the beginning of a transaction that will lead to a deflationary system.

Adaptive State Sharding is required before transactions can be established on the main chain. It involves a third the nodes that are currently in use to validate the transactions. Each 24 hour, nodes are shuffled to find new shards. This prevents validators colluding in the swapping of shards. Elrond breaks down the network into shards instead of working within one chain.

How secure is the Elrond Network

Secure Proof of Stake consensus mechanisms support the staking process that secures the Elrond network. To secure the network during validation, where nodes act in the role of validators, all nodes must stake the EGLD.

Because the Elrond network has a capacity of 15,000 transactions per second, it can be used to make very fast transactions using native EGLD tokens. The Elrond platform can also be used to develop dAapps. This is a way to create a new Internet economy that includes cryptocurrencies and decentralized apps. 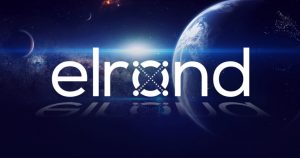 EGLD, also known as eGold, is a native token that can be used to stake in network governance, pay transaction fees and serve as the primary payment method. EGLD can be traded on cryptocurrency markets for profit based upon the difference between the sell and buy price. Elrond’s main strength as a project is its ability scale and offer flexibility to users and developers while also facilitating fast transaction speeds.

How do you choose an Elrond wallet?

You can store eGold tokens safely in any wallet on the mainnet such as the Elrond Wallet. This wallet comes with a hundred-fold lower transaction fees and full custody. Maiar, another official eGold wallet, is backed by Elrond. To access your funds and activate your wallet account, you can register your mobile number using the wallet app. In case your wallet is lost, you can also use a passphrase. To activate the service, you can use the Frontier wallet to EGLD with the Elrond application.

There are many places to store your EGLD. The wallet you choose will depend on the purpose of your wallet and how much it needs to store.

Cold wallets like Trezor or Ledger are the best options for crypto storage. They offer offline storage and backup. They may be more difficult to use and require more technical knowledge. They may not be suited to storing large amounts of EGLD, but they might work better for experienced users.

Software wallets are another option. They’re free and simple to use. These wallets can be downloaded as desktop or smartphone apps. They can also be custodial and non-custodial. Custodial wallets allow you to keep your private keys safe and secure. Private keys are stored in non-custodial wallets using secure elements. They are convenient but less secure than traditional hardware wallets. They may be better suited for novice users or smaller amounts of EGLD.

Web wallets, or online wallets, are free and easy to access from any device that has a web browser. However, they are not considered to be as secure as software or hardware alternatives and can be considered hot wallets. You will likely trust the platform that manages your EGLD. Therefore, it is important to choose a reputable service that has a history of security and custody. They are best suited to hold smaller amounts of cryptocurrency and for people who make frequent transactions.

Kriptomat is a secure storage option that allows you to store and trade EGLD tokens in one place. Kriptomat EGLD storage offers enterprise-grade security with easy-to use functionality.

If you choose our secure platform for storage, buying and selling EGLD or trading other cryptocurrency takes only seconds.

Evidence of the Elrond Stake

Secure Proof of Stake is a variant of the PoS protocol that Elrond uses.

The network relies on a network of validators and nodes that must stake EGLD in order to join the network. The Proof of Stake protocol is more cost-effective and more efficient than other options like Proof of Work. This is how Elrond achieves high transaction speeds and security, as well as sharding.

Elrond hopes to be a leader in the new Internet economy as the project develops. It provides fast transaction speeds, tools for dApp creation and deployment as well as applications for enterprise-class and public use cases.

Get involved in the crypto revolution today and begin your Elrond journey!

How much do nodes earn on the Elrond network?

Participate in the consensus mechanism to receive rewards and process transactions. Validators must make at least 2,500 EGLD as collateral. Starting in August 2021, validators will be earning 21.45% annually. Participants can participate in the network even if they do not have to stake EGLD, or earn rewards for being observers. These are passive members that act as an interface to read and send information. A fisherman, which is a node that validates the validity of blocks once they have been submitted, is also a member of the network. In exchange for rewards, observers or validators can assume the role of fisherman.

What type of projects does Elrond create?

Elrond is home to over 100 projects, including wallets, stablecoins and validators. Elrond can also be integrated with Orion and Reef decentralized finance projects, while ARPA and UTU are other projects that build on the blockchain.
How can you buy Elrond

You can easily buy EGLD online by visiting Kriptomat’s page about Elrond, and then choosing the payment method you prefer.

How can you sell Elrond

You can sell EGLD if you already have it and keep it in a Kriptomat wallet.

Due to volatility in cryptocurrency markets, Elrond’s price changes often. There are many factors that can affect the price of EGLD. Kriptomat allows you to keep track of EGLD prices live.

Other than traditional factors like market sentiment, asset flows from exchanges and the economy generally, the price for EGLD is also affected by token staked and the ratio between protocol fees, inflation, and staking rewards.

No comments to show.